“From the shore we can watch the tide going out, but, because there is no reference point, we don’t know how much height there is between high tide and low tide. In Jersey the peak can reach up to 12 meters”. I have come to meet Severine Amsing. As an artist, she creates textile art and teaches at the weaving workshop at the Gerrit Rietveld Academy in Amsterdam. Amsing has offered to explain how a traditional loom works. As soon as I walked into her studio, I was impressed. In the front part of the room, I came face-to-face with a huge wooden, floor loom. The artist bought it more than ten years ago from Tineke van Deenen, weaver and owner of two clothing stores in which she sold hand woven garments. A metal plate screwed on the wood, indicates that it originally came from Tilburg, once one of the main centers for the textile industry in the Netherlands. “This loom is number 37.”, Amsing says thoughtfully, “I don’t know for sure, but I often imagine it standing in a mill in a large row of textile looms. 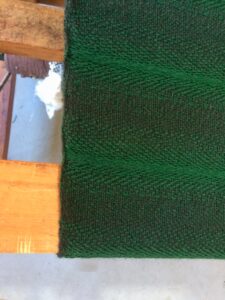 Amsing is working on a cloth that will visualize the 12-meter difference between high tide and low tide in Jersey. The work is nearly done. In a week or so it will be finished. The result is rolled around the cloth beam, that hangs some 20 cm off the ground. Looking at the fabric’s pattern is like watching the oscillatory movement of an ocean wave from above.

Amsing explains that setting up the loom is challenging. Each and every single longitudinal thread has to be brought into position. It’s called warping. For this piece, it meant getting hundreds of strings, each 12 m. long, in a neat row, without getting tangled. 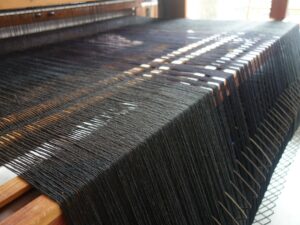 To start off, the warp is rolled around what is called a warp beam, that is to be found at the rear end of the loom. Once this is done, the warp moves up towards a smaller beam, bends over and extends towards the front part, were the weaving actually takes place. Here is where the horizontal yarn is woven into the warp. This is known as weft. The weft travels back and forth, from left to right and from right to left again, inside a flying shuttle that finds its way through the neatly separated threads. It makes a hell of a noise as the shuttle hits the end and bounces back again. 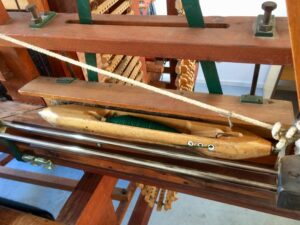 The pattern of the fabric is determined by separating the warp in upper and lower yarns. In this case, the warp is dark grey and the weft is green. Where more warp yarns are lifted, the grey color predominates. The other way around, green gets the upper hand.

This loom has a very ingenious mechanism that enable sophisticated patterns. It consists of various wooden frames, filled with metal wires. The frame is called a shaft and the metal wires are known as heddles. Each heddle has an eye, through which a yarn is threaded. For this piece, Amsing is using 8 shafts. Lifting a shaft results in lifting certain warp yarns. Which of the eight shafts is lifted, is determined by the so called dobby component: a large wooden chain, made of wooden bars, that hangs on the right side of the loom. Each bar has 16 holes, corresponding to the total amount of shafts. Some are filled with a wooden peg, whilst others are left empty. As the chain rolls around, the configuration on the bar determines which shafts are raised and which are lowered. Doing so, determines the pattern of the fabric. This particular arrangement, using eight shafts, enables 256 lift combinations. 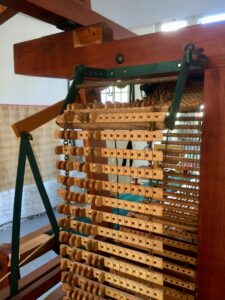 It took Amsing a month to warp the loom. It is important that the threads are very tight. “Basically, you can use any kind of fiber. Cotton, jute, silk, wool and alpaca are all suitable. Prime requisite is that the yarn is strong and smooth. Knitting wool, for example, is useless. It stretches and gives friction. You don’t want a sloppy warp. Somewhere sooner or later, it will get you into trouble.”

Sitting on a wooden plank, Amsing pulls the cord that operates the flying shuttle. This element could best be described as a miniature canoe, pointed at both sides. The weft yarn travels inside. Once the shuttle has moved forth and back, the artist presses the yarn with a reed, best described as a large comb. Then she pulls the cord again, generating the characteristic hammering sound, familiar from costume drama series. “The flying shuttle was invented to satisfy the demand of wider fabrics. Traditionally, the cloth was as wide as our human arms can stretch. As cloth became wider, two people were needed to pass the warp through. With the invention of a flying shuttle, a single weaver could do the job. Nowadays loom machinery exists that manufacture extremely wide fabric rolls. I came across a photo of a textile factory in China that left me flabbergasted. The loom machines where huge. The scale was such that they must be obliged to use an extremely strong and smooth yarn. This notably limits the kind of fibers they can use.”

Amsing likes to emphasize that small details make a difference in the results. “I attended a residency in Scotland where they used a traditional loom practically the same as this one, but the shuttle and the reed were mechanized. You might think it is a small detail, but it led to a more standard outcome.”

As an art student, Amsing started weaving because cloth has two sides, unlike a painting, that only has one. She still keeps the very first cloth she made. Once finished, she rubbed the fabric with a steel brush until the rear side started showing at the front. “In life, nothing is limited to only just one side. Everything has various viewpoints, including us humans.” She is not sure yet how she is going to present the 12-meter cloth when it is finished. “Maybe I let a group of people carry the cloth. I don’t know for sure yet.” In between, she pulls the cord again. “A while ago, I brought an amazingly beautiful piece of fabric with me from Japan. I met up with a colleague weaver and together we carefully frayed one of the edges trying to understand how the fabric was made. We were astonished. It had been crafted with such meticulous care. The hours invested in weaving this cloth could never pay off. It would become way too expensive. When somebody decides to put so much effort and ingenuity into making something that goes beyond usefulness, it becomes something else.”

4 thoughts on “The art of weaving”